Stepping into the shower space can, and should, be a transformative experience and a Tavistock shower will transform your showering experience. Four different shower ranges have been crafted by Tavistock, each with their own strong, individual identity. Covering designs from retro Edwardian class to bold, geometric minimalism, these collections each have their own unique place. Tavistock showers expertly blend visuals with function, culminating in highly desirable shower spaces.

The majority of Tavistock showers feature thermostatic controls, ensuring comfort and safety with each shower you take. This simple feature ensures that the hot water feed will shut off simultaneously with the cold water feed, should this fail. By doing so, it eliminates the risk of scalding. 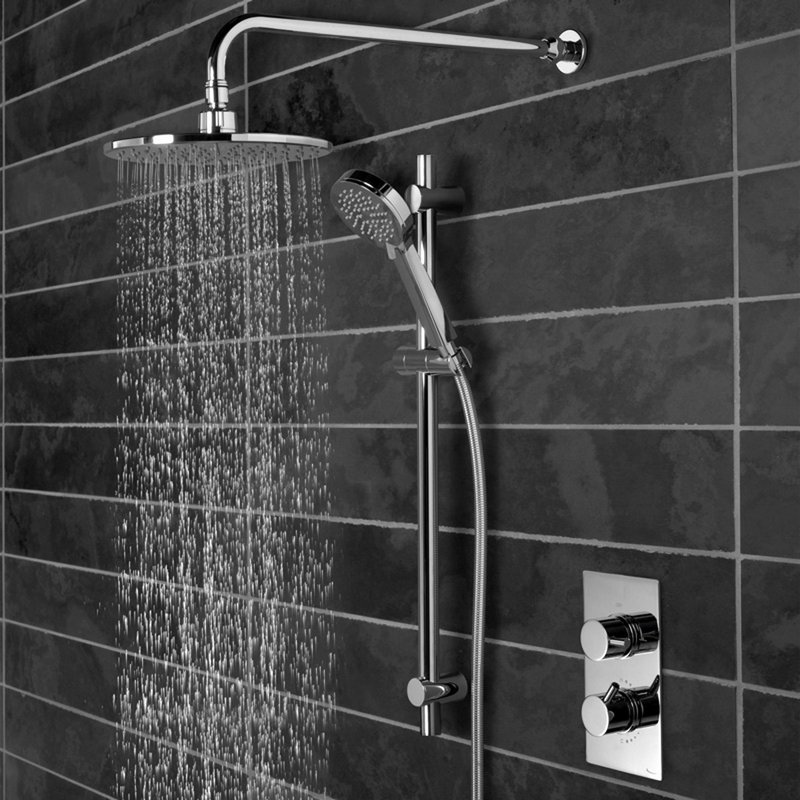 Deftly fusing old style aesthetics with all the benefits that 21st century engineering provides, the Varisty collection of shower units is a triumph of creative design. Classic forms such as cloche shower heads, detailed valves and handles and a timeless mix of porcelain and chrome lend this series a real sense of sophistication. By opting for the Varsity range, the traditional dwelling can be given a shower refurbishment that greatly upgrades its functionality, with no compromise on its appearance.

Bold geometry defines other Tavistock lines, such as Quantum and Index, marking them out for inclusion in the highly fashionable, modern domicile. Gleaming chrome and simple shapes work together, creating a strong, immediate form that is perfect for lovers of crisp, precise design.

All components have been thoroughly tested and engineered to the most exacting of standards. Lever handles and valves turn smoothly, internal ceramic cartridges ensure a shower that remains free from drips when not in use.

Arrangements for your Tavistock shower space come in exposed and concealed forms throughout the different ranges, giving you the flexibility to create a shower enclosure exactly to your liking. Exposed forms lend the interior a more traditional feel, with feeds and pipes on display. Concealed units result in a more modern, streamlined appearance, with a minimum of components visible.

Each of these collections naturally fits in with the other items as a whole, resulting in a bathroom interior that is greater than the sum of its parts. So whether you require a traditional shower unit to fit in with a refined, Edwardian decor, or a stylish, streamlined, concealed unit for the modern living space, Tavistock showers fit the bill.